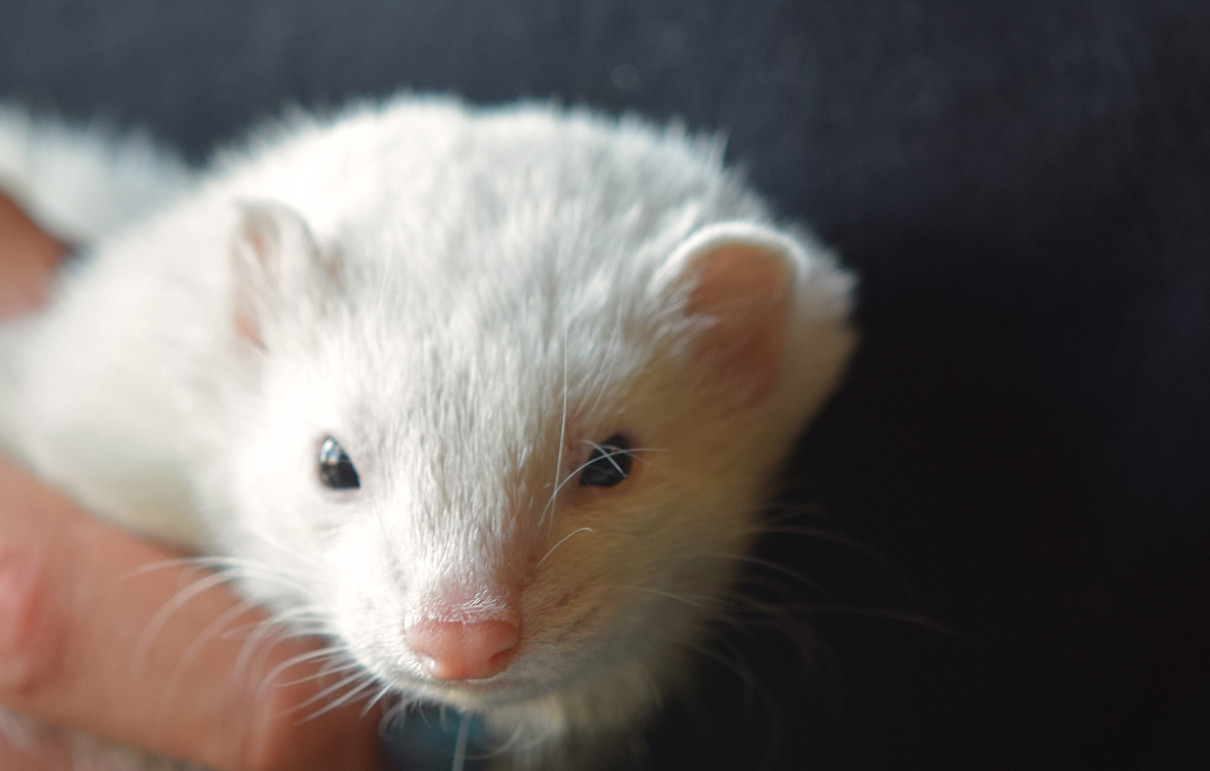 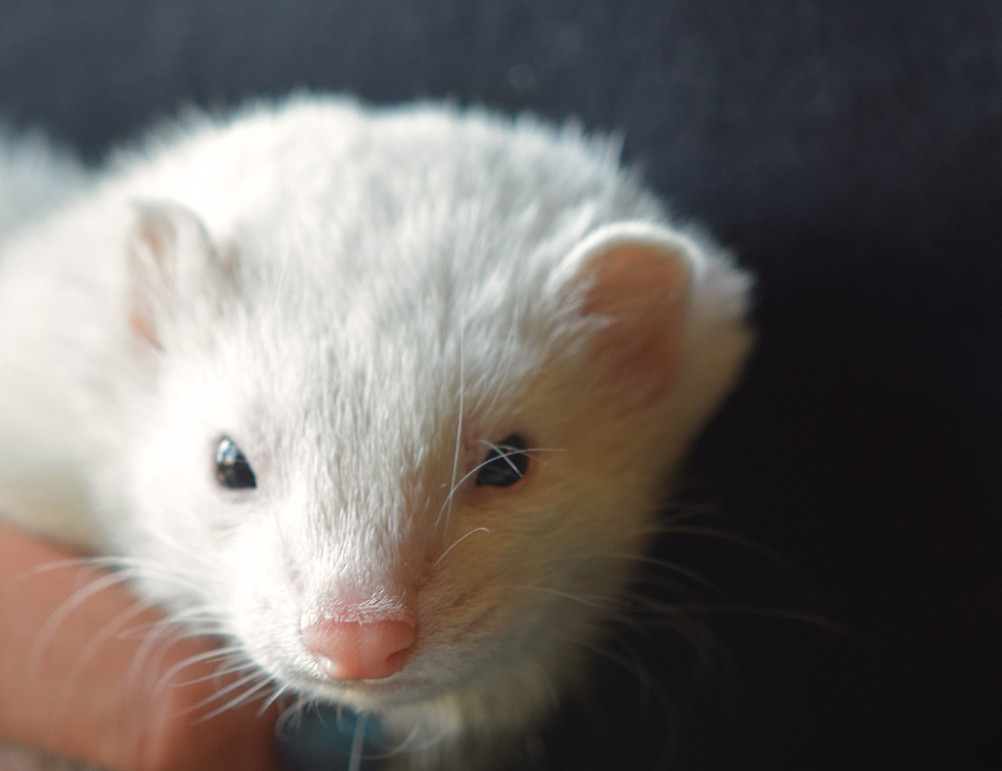 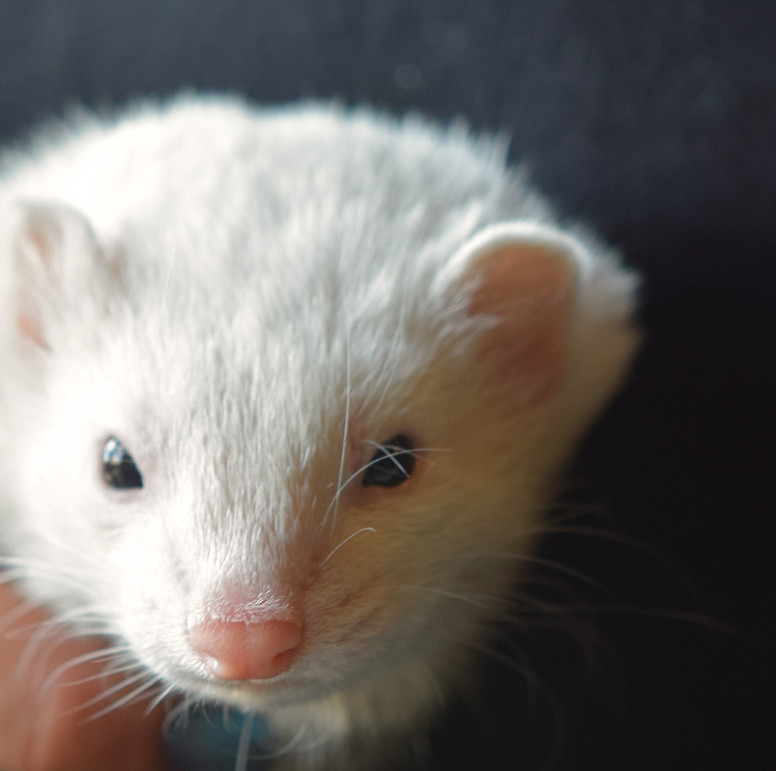 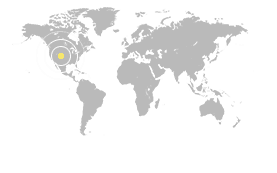 The Domestic Ferret can be found in households all over the world. It is widely believed that these animals have been domesticated from native European polecats (Mustela putorius). Ferrets were domesticated for various purposes – to be mousers on ships and in homes and also to transport cables and wires through long pipes during construction of planes in WWII. Ferrets have an arsenal of body language and verbal queues that help them communicate with each other and with other animals. While their counterparts in the wild have faced a number of threats to their survival over the last century, worldwide domestic ferret population is rising.

Domestic ferrets have a long and slender body, and they are full-grown after one year. Ferrets are sexually dimorphic, meaning the males are significantly larger than females. Males tend to be 38 to 40.6 cm long, whereas females tend to be around 33-35.5 cm long. Adult ferrets are lightweight, and on average weigh between 2-4 pounds.

As natural predators, ferrets have a total of 34 large canine teeth. They also have a set of 5 non-retractable claws on each paw. Their bodies are very thin and flexible with soft fur growing vertically from their bodies. They have proportionally long tails that are 7-10 cm in length. They also have musk glands that can create very strong smells.

Ferrets have been bred for selective fur colors and patterns. There are 7 common colors of ferret fur which are sable, silver, black sable, albino, black-eyed white, cinnamon, and chocolate with sable being the most common. Aside from coloration, some ferrets have been bred for different fur patterns which are Siamese or pointed pattern, panda, Shetlands, badgers, and blazes.

The native habitat of domestic ferrets, prior to domestication, were forested and semi-forested habitats near water sources. There are some feral populations of domestic ferrets in New Zealand, Australia, USA, Canada, Azores, Sicily, Sardinia, and the Scottish Isles.

In the wild, these ferrets would wat small mammals, birds, reptiles, and amphibians.

Although they thrive as house pets. Domesticated ferrets are still natural carnivores, requiring a diet that provides the same nutrients as their natural prey. Food for domestic ferrets should contain taurine and have at least 20% fat and 34% animal protein. In the wild, they would get valuable vitamins and nutrients from eating all parts of their prey, such as the liver, heart, and other organs.

The Life Cycle: Ferrets can have as many as 3 litters per year, which can add up to 15 kits. The gestation period lasts roughly 42 days. Once born, domestic ferrets require about 8 weeks of parental care before they can become independent.

Ferrets’ behaviors are based on their sharp sense of smell and hearing ability. They also have thing, flexible bodies which is ideal for chasing small rodents into their burrow. As pets, ferrets are typically curious and playful, however healthy ferrets do sleep for 18-20 hours each day.

They also will use body language to communicate such as dancing, and wrestling. They dance to show happiness and excitement, and they use wrestling as a form of play. They also have forms of verbal communication, such as clucking to express excitement, screeching to show displeasure, and barking to show excitement.

In the early 1900s, black-footed ferrets fell victim to habitat loss as 98% of their original territory was taken for agriculture. The ferrets also lost a valuable food source, when the US government poisoned prairie dogs, in an effort to maintain the viability of the crop land. On top of that diseases were being introduced that further reduced both the black-footed ferret and prairie dog populations. The two biggest diseases to affect these ferrets were canine distemper and the plague.

The black-footed ferret was thought to be extinct as recently as the 1970s. However, in 1981, a small populations was found in Meeteetse, Wyoming. After conservationists intervened, the population began to rise, before disease decimated their populations again. In 1986, a select few ferret were brought to AZA-accredited zoos and entered into the Black-Footed Ferret Species Survival Plan (SSP). Since that time, the Black-Footed Ferret SSP, and the US Fish and Wildlife Service have reintroduced more than 700 ferrets into Arizona, Montana, South Dakota, Colorado, Utah, Wyoming, and Mexico with plans to introduce more.