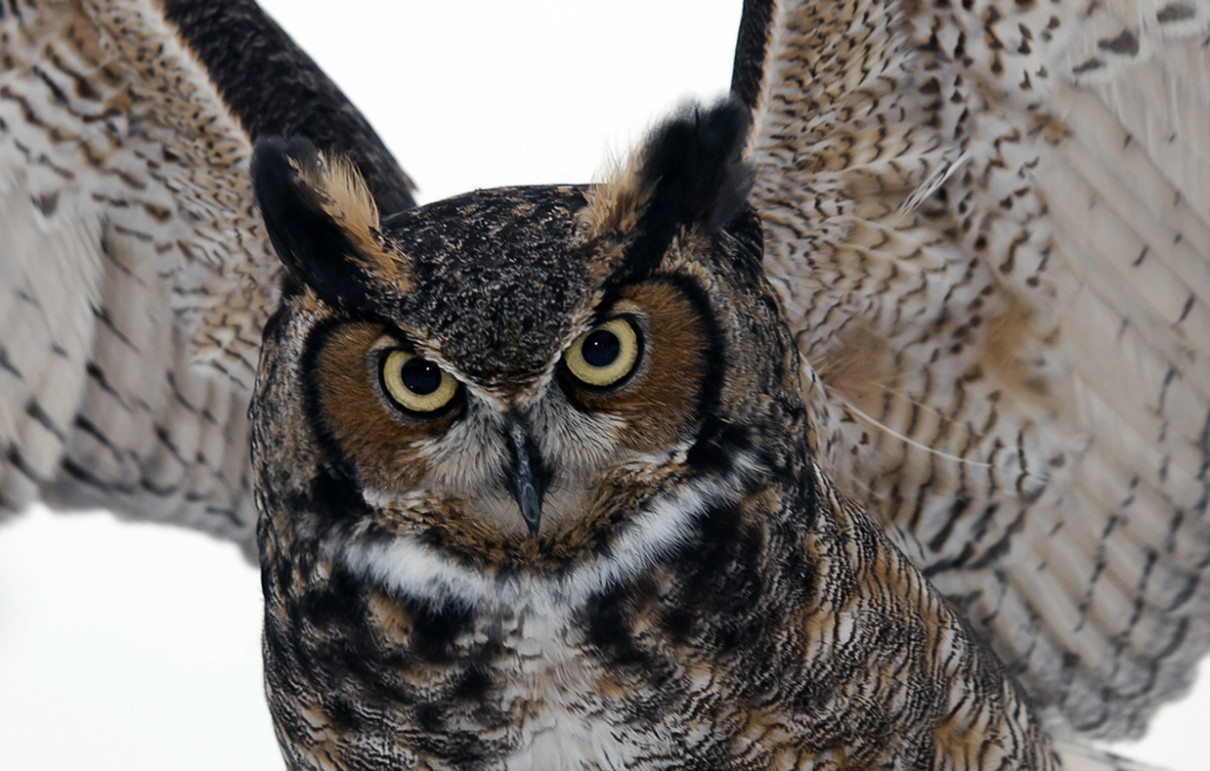 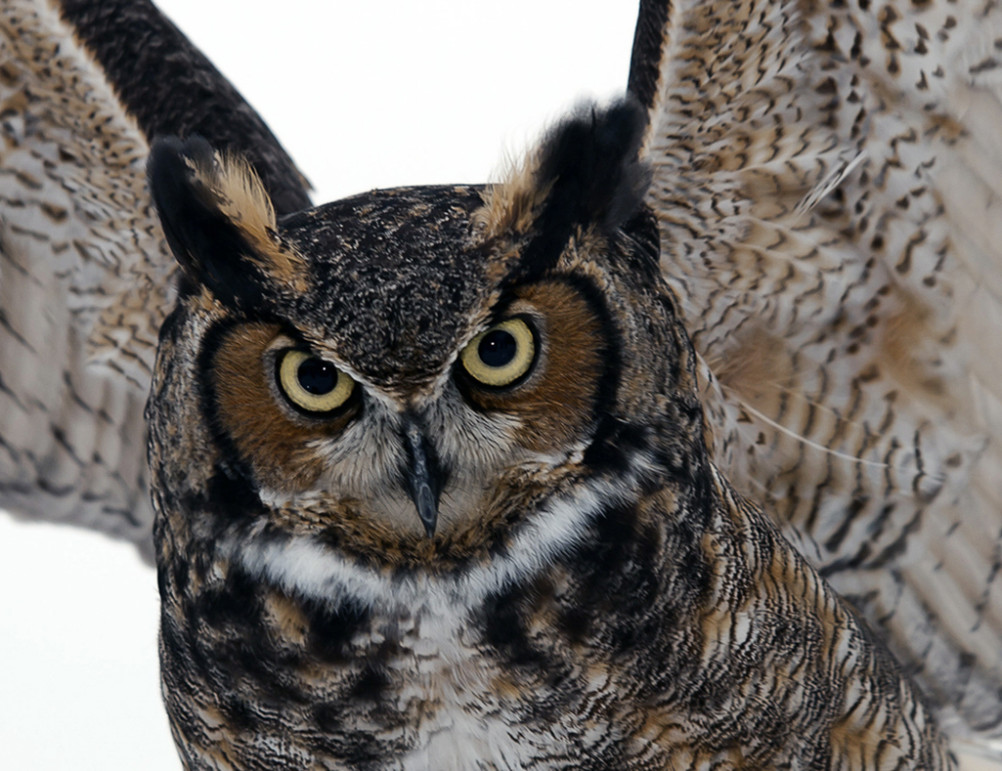 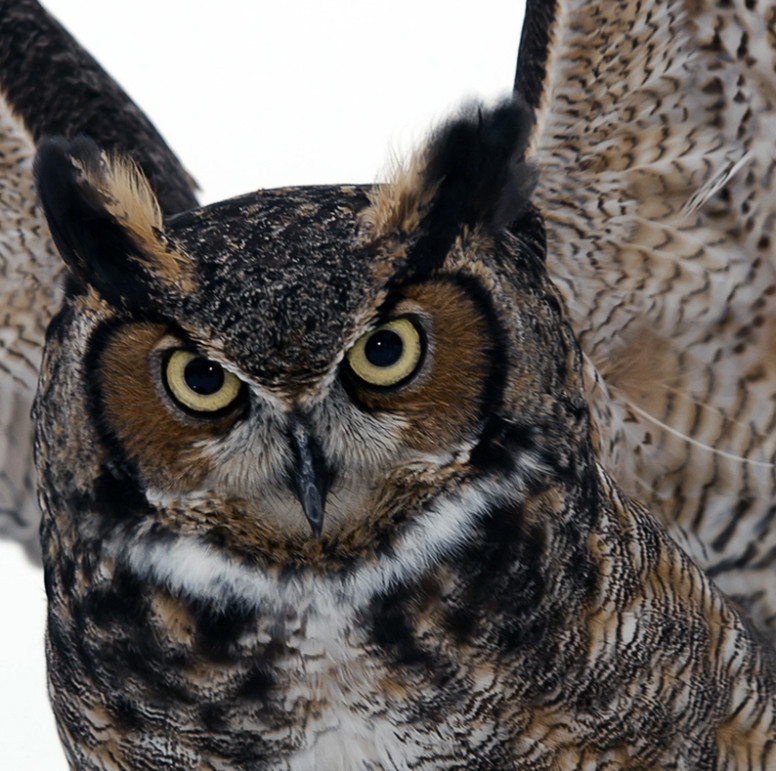 RANGENorth America with a range extending into Central and South America 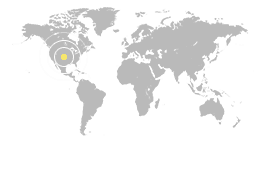 With its long, earlike tufts, intimidating yellow-eyed stare, and deep hooting voice, the Great Horned Owl is the quintessential owl of storybooks. This powerful predator can take down birds and mammals even larger than itself, but it also dines on daintier fare such as tiny scorpions, mice, and frogs. It’s one of the most common owls in North America, equally at home in deserts, wetlands, forests, grasslands, backyards, cities, and almost any other semi-open habitat between the Arctic and the tropics.

Great horned owls are mottled browns and black with a darker back and lighter, barred belly although colorations vary with each individual. They have a white area on their throat. These birds also have feathered tufts on their head that are usually darker in color than much of the body and are used to help them camouflage in their environment. With beautiful yellow eyes and a black beak, the face of a great horned owl is made even more distinct by its white eyebrows. An immature GHO has the same coloring as an adult. Males and females of the species cannot be determined by coloration, but females are often slightly larger and weigh more than males.

Great horned owls are nocturnal and their “hoo hoo” call can be heard throughout the night.

Geographically, GHOs are found through most of North American with a range extending into Central and even parts of South America. The species uses habitats ranging from wooded regions, swamps, and deserts to farmlands and suburban/urban areas.

Great horned owls have a large variety of food items they will hunt and eat. Medium to small mammals such as rabbits, squirrels, rats and mice are preferred species on the menu but a GHO will also readily capture and eat other birds (including smaller owls such as the screech-owl), fish, reptiles, amphibians, and even insects. The geographic region in which the owl lives is the greatest determining factor in what their diet consists of. These birds hunt starting at dusk and through the night. Some have even been known to hope on the ground or wade into water to capture prey. In cases where food is scarce, a great horned owl may also eat carrion.

GHOs reach sexual maturity between 1 and 3 years of age. They are monogamous and protect their territories from other breeding pairs. Courtship between male and female includes hooting at each other. Males may call all year long to protect and define territories, but females generally only hoot during the breeding season when courting with a mate.

Once a pair has bonded to each other, they will select a suitable nest site. GHOs do not build a nest and thus claim vacant stick nests of squirrels or other bird species as well as tree cavities and some buildings. They may also nest on cliff ledges. While the amount of eggs laid in a brood tends to vary per region and based on food availability, in general, GHOs lay somewhere between 1 and 3 white, spherical eggs in a season.

Males and females share the responsibility of taking care of their young. Both will protect the nest and incubate the eggs and both will hunt although once the chicks are hatched, males spend more time hunting leaving the females behind to guard the nest. It has been noted, however, that during seasons when food is scarce both parents will go hunting at the same time and leave the nest unattended. Young may be cared for by their parents for up to 5 months of their lives.

During most of the year great horned owls are solitary (the exception being breeding season). They establish territories which they defend by hooting to announce their presence and ownership of the area to other owls. Those owls who are too young to have developed their own home ranges float on the boarders of other birds territories and remain mostly silent as to not draw unwanted attention to themselves. These owls are not migratory and stay in their home range year round.

Owls, like other birds of prey are very important predators. Owls usually consume insects and small rodents which keeps pest populations under control. They are very beneficial to farmers and our ecosystems. Being that they easily adapt to living in urban areas, they also help control pest species in towns and cities.

Birds of prey can be seen hunting along highways all over the country which is very dangerous for them, many of them are hit by cars or somehow injured along the roadways. They are attracted to roadways because their prey (mice, rats, rabbits, opossums, raccoons, smaller birds, etc.) are attracted to the trash along the side of the road. Everyone can make a positive impact by not littering or even volunteering to remove garbage from roadsides. Although many people may not consider apple cores or banana peels to be “litter”, it can still attract animals to the roadside. Taking it home and disposing of it properly can help a bird of prey near you.

Imprinting: If you find an injured or orphaned animal call a licensed wildlife rehabilitation center in your area. They have proper permits and training to hopefully get the animal out on its own in the wild.

If you find a baby bird and it doesn’t appear to be injured and it’s not in immediate danger (like a predator nearby; ie. house cat), it is best to leave the bird there. Its parents will probably return to it and care for and feed it. If you are sure which nest it fell from, it is safe to pick it up and return it safely to its nest. It’s not true that the parents will smell your scent and not care for the bird anymore, remember most birds have a very weak sense of smell.

If an untrained person tries to care for the bird then the bird will be acclimated to people and never learn to survive on its own in the wild. Most birds and some other animals bond with their caregivers and the larger animals first visible to them when their young, whether or not it’s their actual parents…we call this imprinting which is what happened with one of the Lehigh Valley Zoo’s great horned owls.