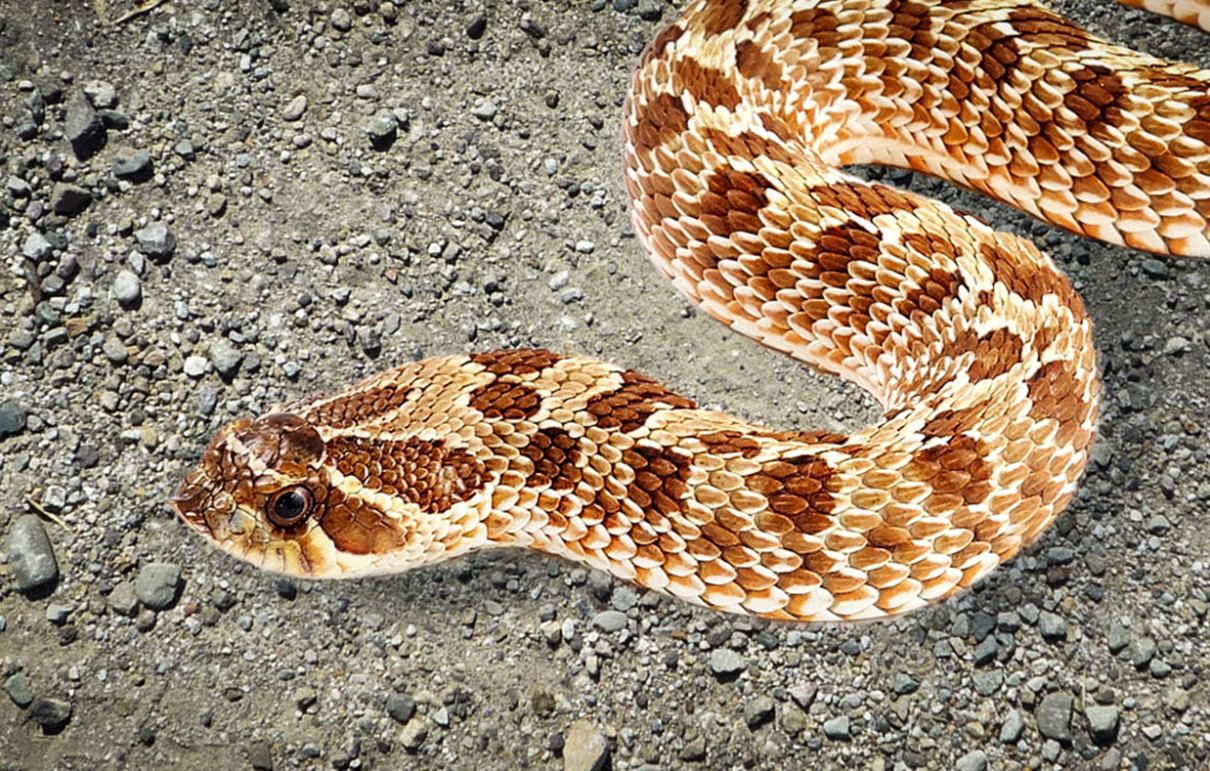 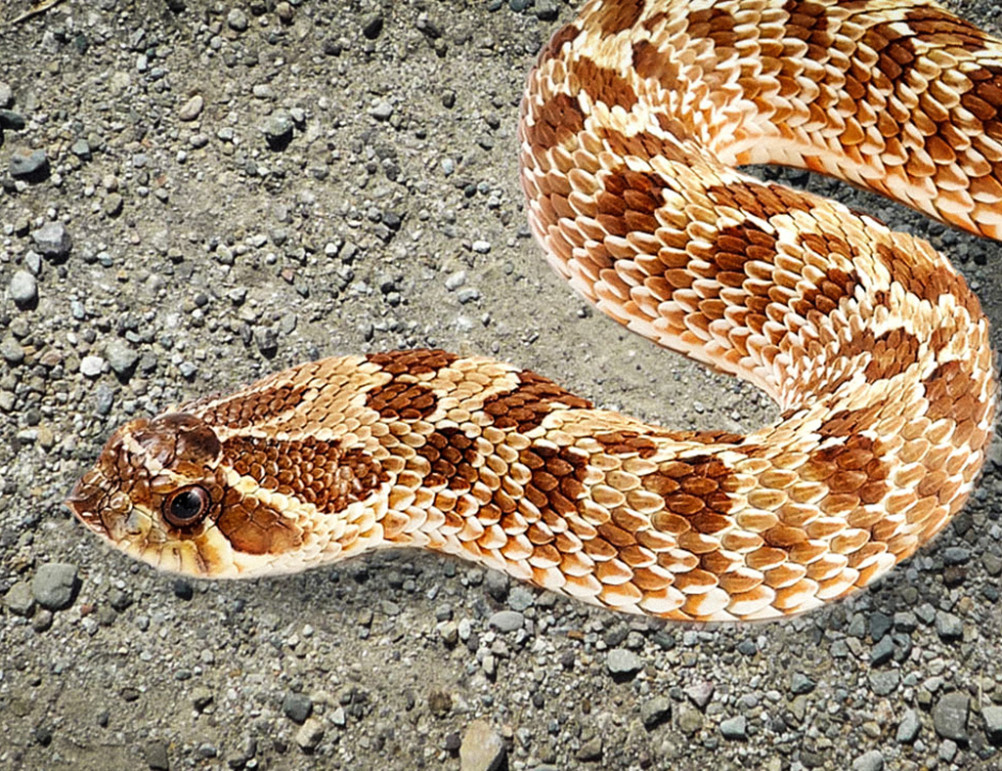 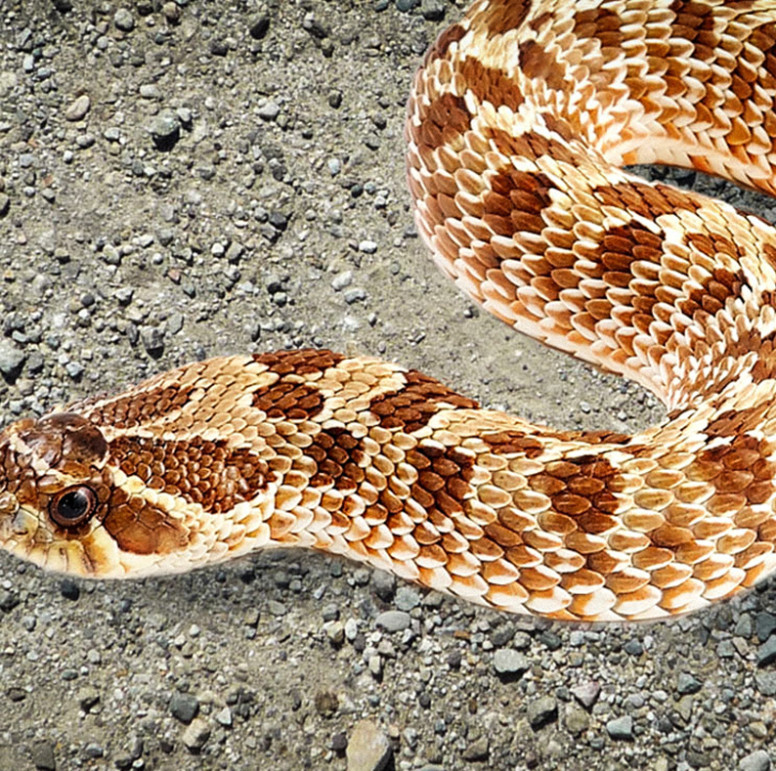 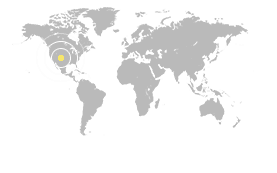 Averaging between 80 and 350g with an average length of 50cm these snakes are grayish brown or light olive green with darker dorsal spots. The ventral is mainly white but blackened underneath the tail. The head of the Western hognose snake is lighter in color compared to the rest of the body and has dark brown bands that run across the top of its head and behind its eyes. One characteristic of this species is that they have an upturned nose which they use for digging and burrowing.

Habitat/Range: They can be found anywhere from southern Canada to northern Mexico. Their preferred habitat is dry and sandy such as short grass prairies, dry rocky lands and coastal islands. It has been found that they are not territorial and that multiple adults will live in the same area.

Life Cycle/ Social Structure: Hognose snakes become sexually mature at the age of two. Their breeding season occurs between the months of June and August. Males search for females to breed with by picking up their scent from a female’s shed skin.

Once a male and female have copulated, 4-23 eggs will be laid in the sand to hatch. Average number of offspring is 13. After 52-64 days the young will hatch and be completely on their own. Females do not invest parental care into their young which is why it is important for the young to be fully developed before they hatch.

Hognose snakes are crepuscular, so they are most active in the morning and in the evening.

Hognose are not territorial, so multiple adults can live in one area. However, they are solitary, only coming together for breeding season.

Life Span: Hognose snakes can typically live anywhere between 9 and 19 years in the wild. In captivity their lifespan may increase to 15 to 20 years.

Conservation Message: The IUCN Red List lists this animal as least concern because of its wide distribution, presumed large population, and because its population doesn’t appear to be declining fast enough to be listed in a more threatened category.

However, because of their ability to mimic rattlesnakes and other venomous snakes, hognose are frequently killed by people because of their perceived danger. If you ever see a snake in the wild, whether you think it’s venomous or not, you should just leave it alone. Even though venomous snakes can be frightening, they are a very important part of the eco-system because they keep rodent populations under control. If you have a venomous snake in your yard and are concerned about your or your pets’ safety, you should call animal control to remove it instead of trying to do something about it yourself.

What You Can Do: If you encounter a snake in the wild observe it from a safe distance and do not approach it, even if you think it is non-venomous. If you approach the snake it might feel threatened and this could potentially lead to a snake bite. If you happen upon a snake by accident and it rears its head at you, just back away slowly and give the snake some space to escape. Snakes would prefer to flee than to bite because biting expends much more energy.

Even if you think the snake is venomous, you should not kill it. Venomous snakes actually pose very little danger to humans as long as they are left alone. Venomous snakes are essential predators that help keep rodent populations under control.