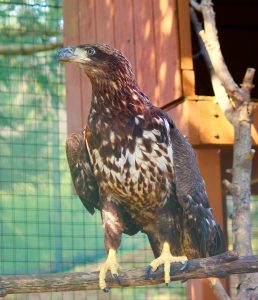 July 7, 2016, Schnecksville, PA – Lehigh Valley Zoo’s resident golden eagle recently welcomed a new roommate as a young bald eagle joined her in the Zoo’s North American section. This bald eagle—like many of the Zoo’s raptors—comes to the Zoo from licensed rehabilitators. It was originally taken in by the Dickerson Park Zoo in Springfield, Missouri, where veterinarians diagnosed it with a fractured elbow. It was successfully nursed back to health but the injury was so severe it was unable to fly. Unflighted, it would be unable to hunt, making survival in the wild impossible. In such cases zoos can provide a safe, permanent home where medical and nutritional needs can be properly met.

Guests should know that at first glance, it may look like a second golden eagle has moved in—but don’t worry—even experienced birders can make such a mistake. That’s because bald eagles go through several color stages as they mature. At about a year old, their plumage looks very similar to a golden eagle, but it takes up to five years for bald eagles to develop their more recognizable adult coloring. As a bald eagle ages, its body color goes from mottled brown and white to a solid deep brown, its head changes from charcoal black to bright white, and its beak goes from black to yellow. Even its eyes change colors, going from dark brown as a juvenile to bright yellow as an adult.

As a member-supported non-profit organization, Lehigh Valley Zoological Society was founded in 2004, but as a treasured community landmark, the Zoo’s history spans over a century. Founded in 1906 by General Harry C. Trexler, a local industrialist, the Lehigh Valley’s Trexler Game Preserve has educated and entertained more than five million people.

Accredited by the Association of Zoos and Aquariums (AZA), the Lehigh Valley Zoo hosts year-round, family-friendly events and activities, educational programs, and camps. With a mission to create a safe, engaging and enlightening wildlife experience for guests of all ages, the Zoo demonstrates leadership in the cultural, scientific and conservation communities. To learn more about Lehigh Valley Zoo, we invite you to visit our website, www.lvzoo.org, or follow us on Facebook.